This is one great game! It plays literally like a Japanese TV drama. Only if you like to read, though because it is text-heavy.

Great, involved and character-driven storytelling! Fun, rich gameplay tha explores links between events and how one action  may affect something entirely different! Memorable, sympathetic characters! Definitely a favourite. Threre is a lot of heart here, compelling and thrilling too. Pulled me in and didn’t let go until I finished the main story. And I bought it for the Steam May sale! Worth all the pennies!

[plot]  A kidnapping on the streets of Shibuya brings together a hot-blooded detective, hard-hitting journalist, former gang leader, the head researcher of a big pharma manufacturer and a part-timer stuck in cat costume for a series of events each more unexpected and outrageous than the last. The story unfolds over the course of one, very eventful day.

[Style]: not art  but live action kind of thing, with actors used – really enjoyed this approach since it’s quite well done here. It’s like a Japanese TV drama. I mean I love good drawn visuals in games but this live action style worked well for this game.

Immersive gameplay that simultaneously follows the adventures of 5 protagonists over the course of one day and explores their involvement in the overarching plot and with one another, how their lives intersect. We see what happens to each of them, at certain plot developments they even meet, sometimes only briefly, but it eventually all comes together.  And the story is very rich in developments and content. Honestly, by the time I reached the final block, 18.00-20.00 I felt like I was with them for a whole week, not just a day – because so much happens and storytelling is so beautifully detailed.

Plot takes place over 10 or so hours, we play it piece by piece, hour by hour and each segment is rich in developments. It shows how eventful a day can be and I think our characters can certainly say they have had a crazy day! We jump between the routes, at some points we need to change some things on another route, to help the current character move forward.

Fun gameplay; choices that may affect outcomes in other routes (showing how one thing may cause another), literally jumping between routes to show the links between characters. Sometimes on a route, you hit a dead end…or so it would appear.  but while a dead end appeared for one character, some new developments opened on another route. To solve impassess on a route, we first need to solve an obstacle on another route. So we switch between the routes using red key words in the text.   I really like this because it brings out the links between routes and how everything is connected; we see how the developments interlink.

The stories are gathered in a time chart and we can skip between times and characters to exlore all outcomes of decisions on various routes.  There is a lot to explore. Thanks to this gameplay, we better see links between characters, how they miss each other or how little knowledge limits certain actions they could have taken if, say, they knew a character earlier. Decisions, fate, coincidences, masterminded plots and manipulation – all of this gets explored.

Fun glossary with general knowledge terms as well as in-game terms. Sometimes the vital red keywords to jumo routes appear in the glossary too.

The writing is very engaging, explores characters and their stories and experiences, each character also expeirences and thinks about  love, family, honour, professionalism. The scenes at times pause development to go deeper into a character’s emotions, explore their past that led them to where they are now.  I love that.  We see their situation, get attached to them, we see them make better or worse decisions and  develop and grow and where it leads.

We see how the links between the 5 people slowly tighten and come together, leading to a dramatic climax of the overarching plot. The story is funny, emotional, dramatic, the developments of characters really make them grow a little and I cared for them a lot.  no character is insigifnicant in the large scheme, some characters eventually surprise a little.

Around 90+ endings in total,  a lot of  really interesting dead ends in which character end the story and are brought to a different life and off the plot, some of them are of course bad as in some character dies, in fact there are many of those. But there are plenty other better dead ends that are nice.  Sometimes a bad end results from a bad choice on another route, sometimes it requires something on a different route to be changed. It’s fantastic, really. And the dead ends are really fun to read. Aleternate what ifs are covered very well  with these endings and we really get to explore all narrative possibilities and outcomes.

And then after you  reach 20.00, and finish, there are a few epilogues to unlock, some with more information than others. The antagonist’s background is also explored and the origins are explained. Seriously, I love games which  take care to tell the story so well. There is quite a lot of bonus content – more endings  / special episodes/.

It wasn’t too difficult for me. If anything, I had so much fun deciding which decision was a mistep that had me blocked.  At certain points some decisions may need to be revisited because you may unwittingly end up in a dead end and get stuck on another route.  When that happens, first, you need to see if you made all the jumps via red keyword.  After that, it’s up to revisiting decision points and making different choices that will unstuck you or remove a bad end. I find this to be a lot of fun, we’re exploring all possibilities and outcomes.

There is no option to fast forward a text. You can, however, turn on autoplay or alternatively press pg down / up to scroll through read text and then press enter to go to any unread / new  sections.

Controls are easy to adjust to for me – you mostly use keyboard. I prefer that, reminds me of consoles in a way.

An idealistic, impulsive  detective who also wants to win the approval of his girlfriend’s father, a former detective. Things get really hectic for the poor guy as he is led on a wild goose chase after a perp that leads the police by the nose… but where does it lead him in the end? He grows quite a bit throughout the ordeal.  On his route we meet the stern future father-in-law, his girlfriend, Sasaymama a fellow detective, Tateno – a detective he idolizes and a cool CIA agent, Stanley. I enjoyed Stanley, there are some good moments of friendship on this route, a great father – son-in-law moment and a great rookie detective – idolized detective moment.  Tateno’s role isn’t small either. Kano Investigates the kidnappaing case of Osawa’s daughter. He carries a diary with wise sayings on how to be a detective.

an ex gang leader wo collects thrash in the district. He loves his town very much and wants to protect it. He is innocent, has a sense of honour and integrity and is just overall great. Has a sick sister. On his thrash collecting route, he becomes entangled with one of the girls involved in the  kidnapping case…and spends a crazy day helping her out, becoming smitten with her in the process. Hitomi and Achi are really cute. I really loved them, they are both very kind and willing to help others. both are very determined, they make a great pair. There is a great father – son moment on this route. Achi route also ties in to gang sublot which Minoru investigates and he has something important in his past as well. The routes includes a somewhat painful, troubled friendship, i enjoyed that story a lot too.

Tama – a girl in a cat costume. Has amnesia.. how does she come into all this? Her role is very crucial. Later, after her identity becomes revealed and plot advances enough, two more characters become available. On her route we meet a hilarious con-man, knee deep in debt, trying to earn a lot of money. 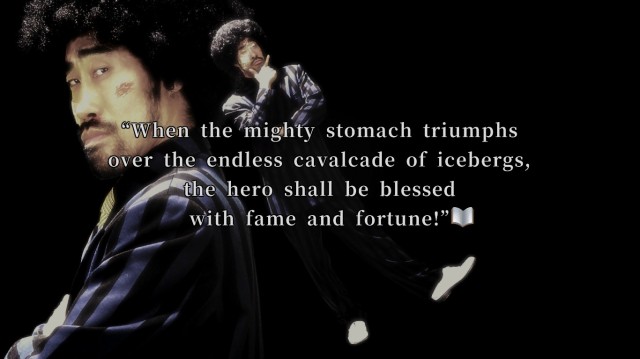 a determined, intense journalist  with a bit of a mouth on him but a wise guy with “tough love’ to give, who is just trying to help his older mentor and colleague… but it will lead him to a whole lot of other trouble as he investigates what he thinks are random topics related to other characters but slowly gradually they all lead him to the main plot. On his route we meet a very nice taxi driver, a shy beginner reporter, a martial artist girl and of course the colleague and his daughter that Minou is trying to help. Yep, it;s all in  a day’s work for Minoru as he  deals with problems one by one, all the while trying to keep a very life or death deadline for publishing  an issue of a magazine.  He has integrity and heart too. I really love him. There are plenty of great support talk moments on this route. Minoru really does his best to help as much as he can. And the taxi driver is just amazing! He always comes at the right moments and at a later time reveals something more.

a genius scientist whose daughter got kidnapped  He has two and both are in danger from the beginning of the story. He is most closely related to the overarching plot. on this route, a lot of important information is revealed. We meet a fantastic detective Kajiwara, very understanding guy, a peron Osawa eventually opens up to. He is closed to the world, his heart is closed also to his two daughter but he seeks to  fix this.  He is, in a way, at the heart of the plot.